A Short History of Dental Implants 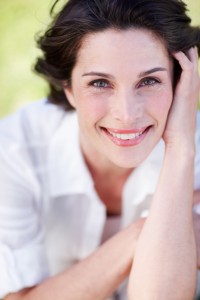 When We Really Needed Teeth…

Before we had stoves, bar-b-q grills, pots and pans, knives and forks, applesauce and meat tenderizer, people had to chew on raw food. Fire was a great discovery, and sticking a drumstick into it probably gave some cave man or woman a thrill, but actual cooking wasn’t done until someone realized that ingredients could be put into a turtle shell and placed over a fire to soften and cook.

It took strong teeth to chew on raw meat and roots, so teeth were essential to eating and staying alive. Archeologists have found remains, from ancient civilizations, that have a variety of tooth implants placed in the jaw.

The skull of a 4000-year-old Chinese woman was found with implants made of bamboo and 2000-year-old Egyptian skulls were found with precious metals and stones embedded in the jaw to replace teeth. 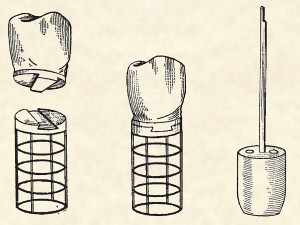 Greenfield’s basket: one of the earliest examples of a successful endosseous implant was Greenfield’s 1913 implant system

The ability of the jaw to retain an implant is the basis for today’s modern dental implants.

The Amazing Discovery That Led to Modern Dental Implants 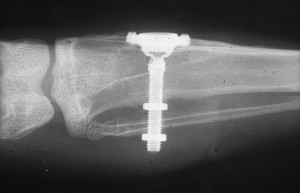 While studying bone cells in a rabbit tibia using a titanium chamber, Branemark was unable to remove it from bone. His realization that bone would adhere to titanium led to the concept of osseointegration and the development of modern dental implants. The original x-ray film of the chamber embedded in the rabbit tibia is shown (made available by Branemark).

In 1952, a Swedish Orthopedic Surgeon named Per-Ingvar Brånemark was trying to find ways of healing the bones of his orthopedic patients. His experiments led to his discovery of osseointegration. Osseointegration is the process that the body uses to keep dental implants in place.

When an implant is placed in the jaw, new bone forms around the implant to hold it in place. This process is called osseointegration. Our body’s ability to do this, makes dental implants safe, secure and a good option for replacing missing teeth. 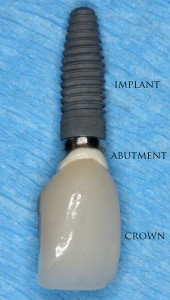 Today’s implants are made of titanium and last a lifetime. Thanks to the process of osseointegration, there’s is no bone loss when a lost tooth is replaced with a dental implant, and the sunken look, that accompanies tooth loss, is avoided.

For more information about the way in which dental implants are placed, go to Dental Implant 101 in our Blog.